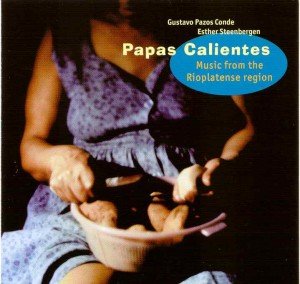 Music from the Rioplatense region
The Spanish word rioplatense derives from a contraction of Rio de la Plata. Explorers in the 16th century named it the great river of silver for it’s access to the ancient treasures of the Andes. This river of silver flows between present day Argentina and Uruguay. The early settlers of the Rio de la plata region were predominantly Andalusian, taking their beloved guitar on the long journey to the America’s.

Although the Rio de la plata led directly into the silver mining district of Bolivia, the Spanish conquerors who entered the new land from the Atlantic side of the continent never controlled the mining operations. They wound up in a huge desolated part of the world, completely isolated from Europe. It’s within this context  that a unique style developed which was named after the river of silver: musica rioplatense.

The best known example of Musica Rioplatense is the tango which originated in Buenos Aires. In the countryside, life ran at a slower pace, which can easily be heard in the milongas, mainly played by the gauchos, the South-American cowboys. These inhabitants of the extended plains played an important role in spreading the news, accompanying themselves on the guitar like European troubadours and minstrels had done.

Gustavo Pazos
Papas Calientes contains traditional music as well as works by composer/guitarist Gustavo Pazos Conde. He wanted to make this record for a long time and I was happy and proud he asked me to join him.

We use cookies on our website to give you the most relevant experience by remembering your preferences and repeat visits. By clicking “Accept All”, you consent to the use of ALL the cookies. However, you may visit "Cookie Settings" to provide a controlled consent.
Cookie SettingsAccept All
Manage consent

This website uses cookies to improve your experience while you navigate through the website. Out of these, the cookies that are categorized as necessary are stored on your browser as they are essential for the working of basic functionalities of the website. We also use third-party cookies that help us analyze and understand how you use this website. These cookies will be stored in your browser only with your consent. You also have the option to opt-out of these cookies. But opting out of some of these cookies may affect your browsing experience.
Necessary Always Enabled
Necessary cookies are absolutely essential for the website to function properly. These cookies ensure basic functionalities and security features of the website, anonymously.
Functional
Functional cookies help to perform certain functionalities like sharing the content of the website on social media platforms, collect feedbacks, and other third-party features.
Performance
Performance cookies are used to understand and analyze the key performance indexes of the website which helps in delivering a better user experience for the visitors.
Analytics
Analytical cookies are used to understand how visitors interact with the website. These cookies help provide information on metrics the number of visitors, bounce rate, traffic source, etc.
Advertisement
Advertisement cookies are used to provide visitors with relevant ads and marketing campaigns. These cookies track visitors across websites and collect information to provide customized ads.
Others
Other uncategorized cookies are those that are being analyzed and have not been classified into a category as yet.
SAVE & ACCEPT