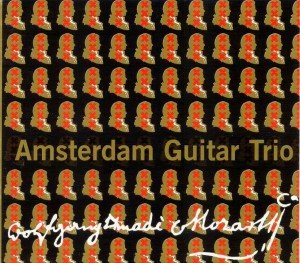 Wolfgang Amadeus Mozart (1756 – 1791)
In the eighteenth century the guitar was regarded as a pleasant way of passing time and little serious music appeared for the instrument. Like many of his contemporaries, Mozart never wrote a single note for the instrument. Although in the last two centuries the guitar has been developing into a full member of the classic music scene, the obvious lack of repertoire from this period remains. Of course one can think of many reasons not to play Mozart on three acoustic guitars. Nevertheless, we did it. We simply couldn’t resist the delicacy and refinement of this music, the unequalled quality of the compositions and, above all, the pure joy of playing Mozart.

The international succes of the Amsterdam Guitar Trio is not only a result of their excellent muicianship, but also of the uniqueness of their presentation. Apart from their much-praised virtuosity and musicality, the trio has been singled out for its programming: surprising, transcriptions are followed by contemporary pieces that exploit unknown possibilities, hardly imaginable on the guitar. The Amsterdam Guitar Trio casts a fresh light upon music originally written for other instruments by rearranging them for three guitars.  Successfully breaking the rules as proved by the Trio’s transcription and recording of Vivaldi’s The Four Seasons which won them an Edison Award.

We use cookies to ensure that we give you the best experience on our website. If you continue to use this site we will assume that you are happy with it.Ok